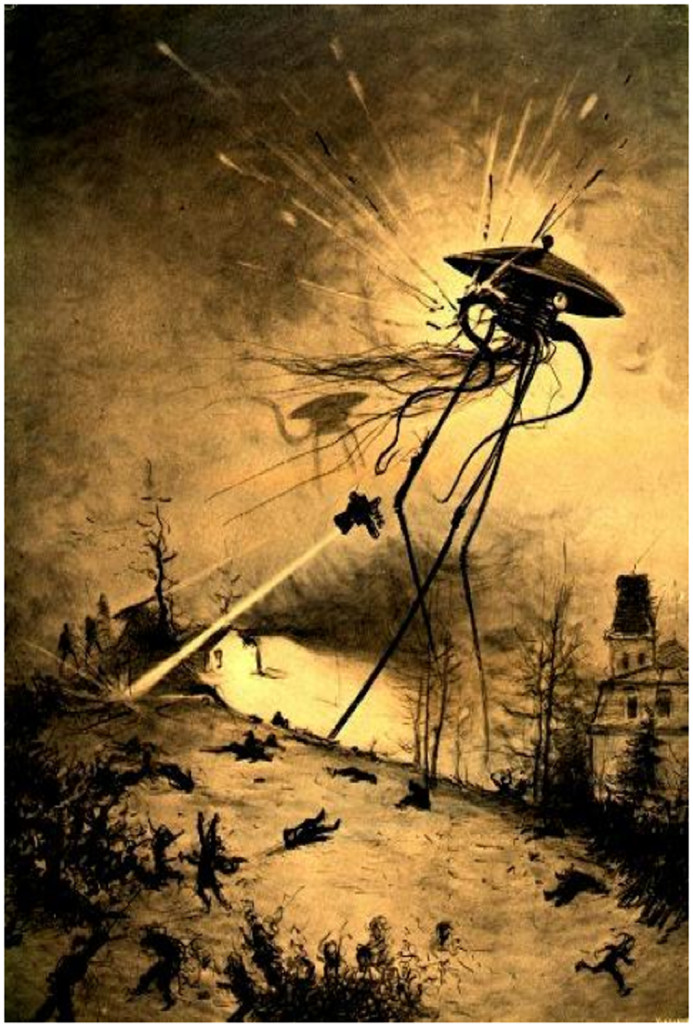 It’s a day unlike any other on October 30th. You and your family are getting prepped for the next night’s bunch of trick or treaters. You and your kids have just gotten out of the grocery store, bags filled with goodies for dinner sitting happily in the trunk. You just got into the car and turned on the radio when you hear an urgent message sounding out of your car’s speakers. A terrified-sounding radio announcer just begins talking about the sudden onset of martial law throughout New Jersey.

Your kids exchange glances. They don’t know what’s going on, and why you look so worried and confused. You still have no idea why the announcer sounds so panicked, but are growing more and more fearful as the minutes pass.

Then you hear it.

You hear that aliens have declared war on Earth.

You look outside, but do not see ships. Still, you can’t shake the possibility that they are out there, waiting to end the lives of you and everyone you know. Scared for your life and the impending onslaught of creatures for another world, you issue out a silent prayer, buckle your kids in, and rush home, hoping that none of the odd green people of Mars will find you en route. As soon as you get home, you slam and lock the door, explain the terrible news to your husband, and watch as he grabs his rifle.

Welcome to what people felt when they supposedly heard The War of The Worlds back in 1938.

The truth of the matter is that, as you may have probably guessed, there was no alien invasion, nor any impending doom for the citizens of New Jersey on that October day in 1938. The radio clip that people were hearing was from a local radio drama anthology series named The Mercury Theatre on the Air, and it was spearheaded by the famed radio announcer, Orson Welles.

The broadcast was simple and believable thanks to its presentation. Instead of normal radio action involving live actors talking to one another, comically obvious sound effects and music, the War of the Worlds show was based off a series of realistic radio announcements, complete with the authoritarian feel of an actual government-sponsored radio announcement.
So, how does this tie into New Jersey?

The answer is quite simple. The town that was supposedly hit by alien spaceships was none other than Grover’s Mill – a part of East Windsor, New Jersey. Surprisingly, the show itself aired from the 20th floor of a building in Manhattan, making the show itself a New York City based production.

Of course, what makes the War of the Worlds transmission so famous isn’t that it was novel in its idea to have aliens attack the world. What made it famous is that it was purported to be a cause of mass panic and hysteria throughout the nation.

Apparently, CBS supervisor Davidson Taylor had received a phone call in the control room while the radio show was being aired, asking them to stop the show. Many people assumed that the show was not a hoax, which in turn caused rioting, suicides as well as a massive wave of concerned callers who felt a need to interrogate the radio host about details on the looming alien threat.

The insanity that reigned at the radio included people asking how the station knew about the stampede that supposedly occurred in a New Jersey hall, how many people died from the attacks, as well as whether or not the world was about to end. According to some sources, the entire phone board of the CBS station was lit up with constant calls from panicked individuals across the country. 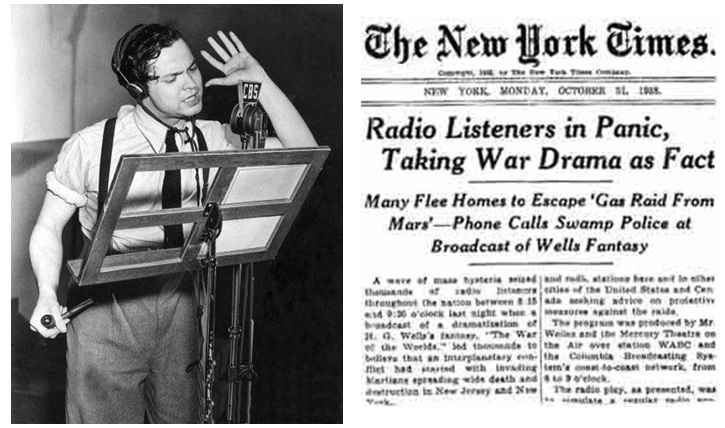 The hysteria continued to have real life consequences. People in the CBS air studio had to lock up and destroy the show’s scripts due to the fact that people had begun to break into the station in order to ask questions.

In one case, a man who spotted a water tower from his home’s window decided to take a couple of shots at it with his rifle, believing it to be an alien mothership.

To make matters even more ridiculous, the paranoia and panic of the radio show’s listeners spread to other shows as well. Jack Paar, who worked for a CBS affiliate radio based out of Cleveland at the time, actually had to pause his live show to tell people that the world was not going to end, and that Martians are not attacking. Some sources even claim that the gullible listeners also called police stations in hopes of getting updates about the alien attacks.

Up until War of the Worlds, the radio show was not very well-rated or popular. Despite its lack of regular listeners, this particular segment of radio had turned the entire public eye of America towards the tiny hamlet of Grover’s Mill.

If it was a shock to you, you can only imagine what a shock it was to Welles. Orson Welles was quite surprised to find out that there was apparently news about War of the Worlds being transmitted in the middle of Times Square, as well as on other radio stations.

The lighted bulletin, which had appeared after the show had aired, simply read, “ORSON WELLES CAUSES PANIC.”

Despite the massive amounts of panic and hysteria throughout the nation, the people of Grover’s Mill and the surrounding East Windsor area were blissfully unaware of any turmoil that the radio show had caused. After all, radio announcements detailing savage alien attacks on Earth soil didn’t seem too believable – especially when it was supposed to be happening in the locals’ own back yards.

The announcers on the radio were very descriptive in the carnage that ensued, as well as the alien ships. The ships, which were basically flying saucers that “walked on tripods,” were supposed to be massive and noisy. If anyone in the Princeton area was too concerned, a quick peek outside would have sufficed.

Jersey folk may also have noticed that something was awry when they heard the names of the supposed landmarks in town. Announcers had tweaked the names of actual places due to the fact that it could cause a lawsuit. As a result, Princeton University Observatory was just called Princeton Observatory. McGill University became MacMillan University. The Hotel Biltmore became a fictional Park Plaza, and the world-famous Langley Field became the Langham Field.

In a nutshell, the people who actually lived in the area had every reason not to believe the story.

Even though a large portion of people did not panic due to the fact that it was one of those rare emergencies where looking out the window could fix everything, there still was panic in certain parts of New Jersey that weren’t too close to Princeton’s suburbs.

One thing that was certain was that a large portion of policemen and civil workers didn’t appreciate the radio show’s use of the local scenery for their broadcast. They also were pretty vocal about it, too. For example, Trenton’s then-city manage wrote a nasty letter to the FCC, claiming that the incoming calls to their local police force “completely crippled” the facility’s ability to communicate for several hours. It’s safe to say he wasn’t the only one who complained, either.

Was The Hysteria Overblown?

Though there was a real announcement in Times Square accusing Welles of causing panic and mayhem, and though there were news headlines talking about the insanity that ensued from panicked people assuming an alien attack occurred, there is still reason to believe that the War of the Worlds panic was, for the most part, made up.

Perhaps the most obvious reason why the panic may have been mostly fabricated is the fact that announcers repeatedly told people that it was a radio drama show during the actual broadcast. They didn’t just say it once, either – the radio company did it four times throughout the program. So, unless the listeners just turned off the radio in hopes of hiding from aliens, the majority of the 12 million listeners who heard the production would have known it was a spooky gag.

Along with the regular announcements stating that the War of the Worlds was not an actual war, radio programming guides printed in newspapers also announced that the radio drama would be playing that October 30th. It’s also generally assumed that there were also occasional commercial breaks, which most likely would not have been happening if people legitimately were being blown to tiny bits by little green men from Mars.

To make matters just a little bit more obvious, War of the Worlds wasn’t even an original radio script. It was actually based on a play written by science fiction author H.G Wells in 1898. Considering the play’s exceptional critical acclaim, it would be absolutely shocking if no one recognized the plot, the title, or the announcements in the paper discussing how the radio program was based on the classic play.

The War Got Weirder: Why Some DID Panic

It’s safe to say that the amount of panic that had been discussed in newspapers and radio was most likely overacknowledged. Oddly enough, Wells’s original play described Martian weapons such as poisonous black smoke. After the first World War, knowledge of weaponized gas had become commonplace among both military and civilians alike. So, to a point, it almost seems as if Wells had predicted some modern weaponry, which in turn may have caused a little panic in civilians.

The most driving force towards the paranoia seemed to be perfectly explainable. It was 1938 – during World War II. Americans were already concerned about the possibility of a foreign threat and often listened to the radio to make sure that they were still safe at home. The possibility of a much more foreign threat could easily have set off some tension in people who only recently escaped Nazi Germany.

The overall layout of the online program also may have caused many to shut off the radio. The most dramatic part happened right between the beginning of the show and the first third of the broadcast. If someone were to have missed the first part of the broadcast and turned the radio off before the middle of the show, it’s possible they may have believed it – assuming they weren’t in New Jersey, of course.

Oddly enough, the vast majority of the people who panicked were the older crowd. Most of the younger folks had already recognized Welles’s voice from the hit radio series, The Shadow.

The War of the Worlds became an international sensation as well as an international synonym for works of fiction that cause widespread panic. Orson Welles, through airing this program, also cemented his place in sci-fi history.

Oh, and New Jersey had gotten some brand new historical and cultural landmarks.

A monument to the fictional “Ground Zero” of the Martian attacks can be visited at Van Nest Park in Princeton Junction. There, you can photograph the monument, which depicts an alien attacking from one of the “tripod” ships that Welles had so famously described. Down the street from Van Nest Park is a water tower that was mistaken for a Martian – specifically, the Grovers Mill Company water tower. Both can be visited an photographed by locals who love Orson Welles, HG Wells, or really, any sort of hilariously retro science fiction stories.

The area also has an annual celebration for the anniversary of the infamous broadcast, and it sometimes gets a little strange. On the 60th anniversary of War of the Worlds, the local historical society had thrown a Martian-themed ball. Thanks to Welles’ broadcast, we also can now tell you that 9 out of 10 Martians approve of New Jersey as a tourist spot.