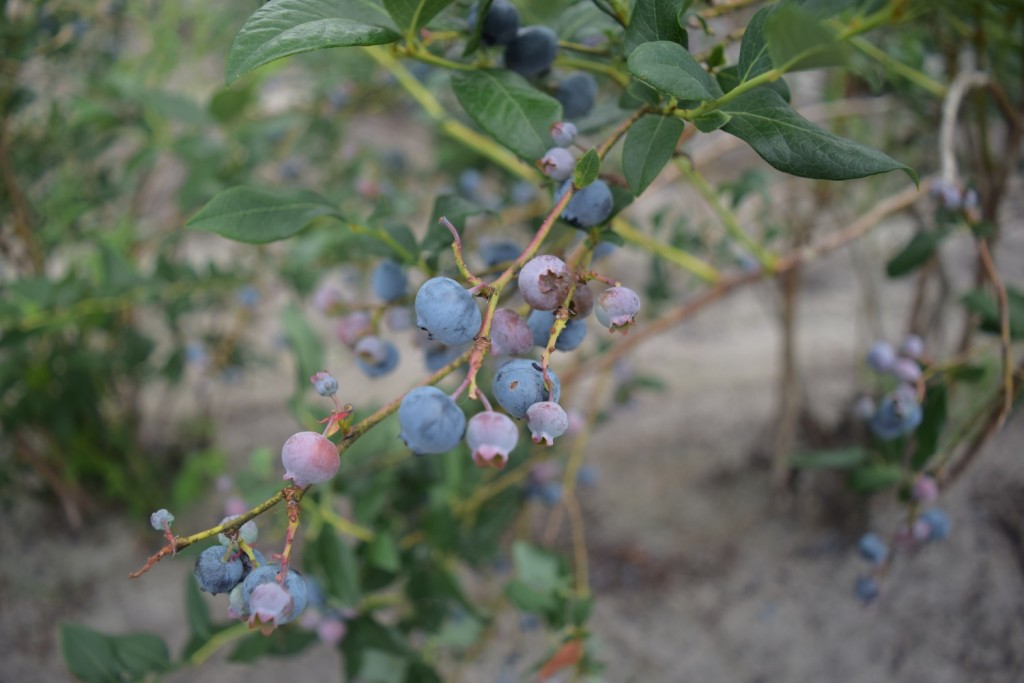 The sun was sweltering as I stepped outside of my house and although the morning was still young, the air was already heavy with moisture. It was the kind of summer day you just knew was going to end with a magnificent display of lightning flicking across the sky and torrential rain that tantalized you with the hope of a cooler night.

Despite the oppressive heat threatening to strangle the oxygen right out of my lungs, my mother, daughter and I packed up the car with the essentials for the day: sunglasses, lots of sunscreen, a few farmer-style straw hats, a change of shoes and one great big bucket.

The familiar drive took about 45 minutes. This is a trip I had made year after year with my mom when I was a kid and now we were going to share the same experience with my 7-year-old daughter, Juliet. We eventually turned off of the main road as the suburbs gave way to farmland. After turning onto a winding, sandy driveway, a small open-air building became visible ahead and a deeply suntanned man in worn jeans shaded his eyes against the intense July sun to watch our approach. We parked under a large oak tree next to the building, ambled out of the car and looked around. Before us, acres upon acres of blueberry bushes stood ripe for picking.

Well’s Blueberry Farm in Southampton Township, New Jersey has been owned by the same family for five generations. They painstakingly cultivate their blueberry crop year after year and welcome visitors from mid-June through late-July to pick their own berries. This is a no-frills farm experience. They hold no festivals and there are no bells and whistles–just the pleasure of picking your own fruit in peace.

Once inside the make-shift building, the farmer handed us tin cans that had ropes on them for tying around your waist. This allows your hands to stay free for optimal picking but the bucket we packed in the car would relieve us of our burden once the cans got full and started to weigh us down. (Ever had a pound of blueberries strapped to your hip? It gets heavy!)

The farmer started up his tractor and we climbed into the wagon that would ferry us out into the field. Upon disembarking, we quickly sized up the rows of bushes and chose one that looked promising. I took a moment to appreciate the straightness of the perfectly spaced bushes, the silence that settled as the tractor rumbled away and the sun beating down on me.

Juliet was walking along in front of me, her tin can bumping lackadaisically against her hip. She stopped to inspect a cluster of berries. I know that when I was little, more blueberries made it into my tummy than into my bucket. Like mother, like daughter…she popped the first handful into her mouth and sneaked a look at me with a question in her eyes. I popped a couple berries in my mouth as well and smiled to let her know it was okay. Eating while you’re picking is part of the fun!

We worked diligently for at least 2 hours to fill up our gallon pail. The rhythm is almost cathartic and allows one to clear their mind of all the stress of everyday life. Despite the heat, I was able to think clearly while I was in that field. There was nothing but me and my family creating a memory—no cell phone, no distractions—just us enjoying each others company and the occasional blueberry.

While my daughter was happy to share this experience with us, she quickly got distracted by the abundance of insects in the field. Vibrant dragon flies darted between bushes, lady bugs sunned themselves on plump berries, inch worms made their way along the underside of leaves, beetles crawled across the sand eating dropped fruit and spiders wove webs trying to snag a stay fly or two. Juliet was enthralled by the variety of bugs and spent more time trying to catch dragon flies than she did picking blueberries. My mother and I rolled our eyes and laughed to ourselves because I had been so much like her once.

On the drive home from the farm that day, Juliet continued to eat berries in the back seat. She declared that blueberries are her absolute favorite fruit and that she hopes we can pick them every year. Within minutes of that statement, she was asleep. With a full belly, blueberry juice on her face, and a sun-kissed glow on her rosy cheeks, her head lolled gently with the motion of the car. My mother and I spent the drive planning our next farm adventure. Apple picking is high on my list of childhood memories and I can’t wait for September to share another fun farm experience with my daughter.

The History Of Blueberries In NJ

2016 is the centennial anniversary of blueberry cultivation in New Jersey. Although they put up quite a fight in the beginning, these once unruly berries, known as “Little Blue Dynamos,” are now grown with ease around the world. All they need is acidic, sandy soil with good drainage, lots of sunshine and some cross pollination with the help of bumble bees and butterflies.

The story of the blueberry started in Whitesbog, New Jersey with a woman name Elizabeth White who was the daughter of a cranberry farmer. Determined to cultivate wild blueberries despite their inconsistent and recalcitrant nature, she teamed up with USDA botanist Frederick Coville who helped her crossbreed the different varieties until they came up with the deliciously healthy fruit that New Jersey is so famous for today.

The pair had their work cut out for them. There was a multitude of different varieties of wild blueberries that produced everything from sour berries, to flat ones, to those that White’s father described as “peachy” flavored. Their goal was to cross breed the plants with the best berries until they had a successful, marketable product.

The vast Pine Barrens of South Jersey were too large an area for just two people to cover so they paid men who were familiar with the land to venture out and bring back the biggest berries they could find. The bushes that the best berries came from were named after the men who found them, which added a little extra incentive to their tedious work. Some bushes were called “Adams,” “Harding,” “Dunphy” and “Sam,” among others. Within 5 years, they had discovered over 100 different varieties!

Using these specific wild bushes that were known to produce the traits White and Coville desired, the duo crossbred different species until they came up with what is most common in New Jersey today: the High Bush Blueberry. The first batch of commercially sold blueberries went to market in 1916 and since then, they’ve been shipped all over the world.

By 1962, blueberries were growing in 13 other states and by 1971, blueberries officially entered into pop-culture when a girl turned into a human blueberry in Willy Wonka and the Chocolate Factory. Everyone remembers the famous scene where spoiled Violet demands to eat an experimental candy and ends up being rolled away, bright blue and embarrassed, by Oompa Loompas.

In 1974, the USDA declared that July would be known as National Blueberry Month, which is fitting considering that July is the height of picking season. In 1980, the candy company Jelly Belly developed a blueberry jelly bean so that when soon-to-be-president Ronald Reagan’s inauguration occurred, there would be red (wild cherry), white (coconut) and blue (blueberry) jelly beans in honor of his favorite snack.

More recently, many studies have been done on the health benefits of eating blueberries. Scientists have found them to be rich with antioxidants that help protect against things like cancer, heart disease and age-related illnesses. It has also been proven that blueberries help prevent urinary tract infections and combat free radicals in the body.

As a result of these findings, demand for blueberries has grown exponentially. The restaurant industry in America is always quick to jump on dietary trends and the use of blueberries on menus around the country increased by close to 100% between 2006 and 2013.

In 2003, a 4th grade class from Veterans Memorial Elementary School in Brick lobbied for the blueberry to be named New Jersey’s State Fruit as part of a class project about the legislative process. Governor Jim McGreevey passed legislation in January, 2014 officially naming the berry our state fruit.

Making their second presidential debut, blueberry bushes were planted in the White House’s kitchen garden in 2011 for the Obama family to enjoy. As of 2014, blueberries are produced in 5 continents and over 1 billion pounds are produced globally every year.

Despite their stubborn beginning, blueberries have become a staple in the diets and the hearts of people everywhere. If it wasn’t for the determination of Elizabeth White, we may never have known the beauty—and deliciousness—of the High Bush Blueberry in all of its sweet, juicy, deep blue wonder.

Kira is a graduate of Rider University and a life-long New Jersey resident. She can be reached by email at Kira@FunNewJersey.com or on Twitter @FunNewJerseyKL

New Jersey is known for subs. In fact, we even have a chain called Jersey Mike’s devoted to the ...

Are you looking for something new to do in New Jersey? Something exciting? Something that no on ...