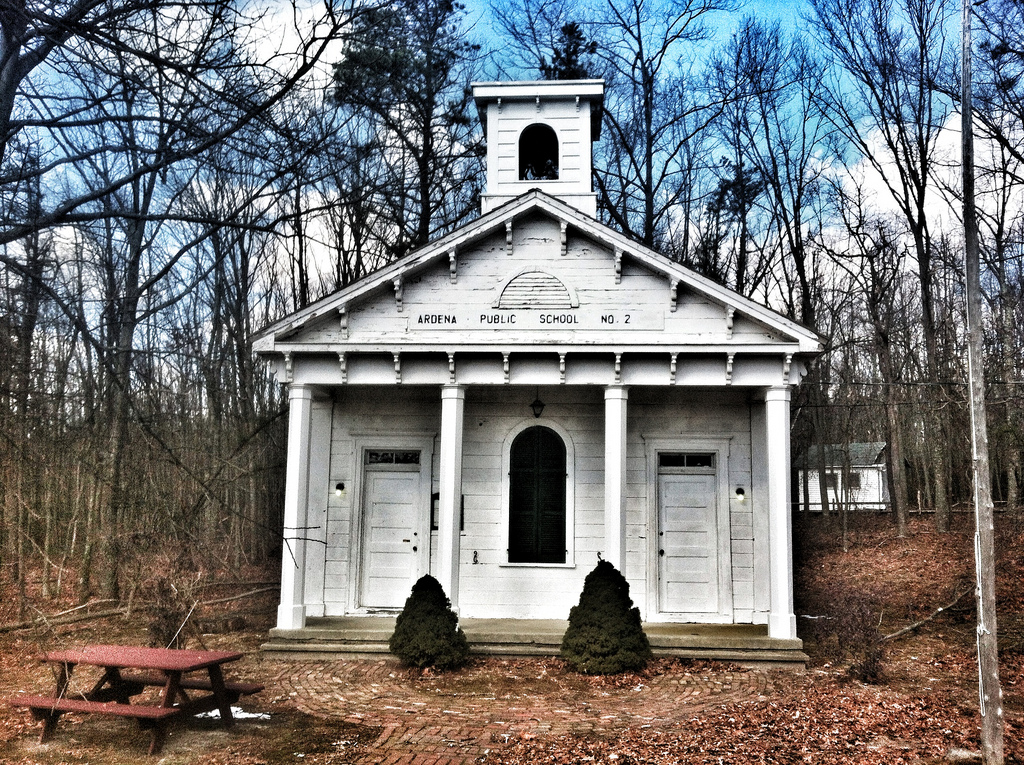 Sitting on Old Tavern Road on the border of Farmingdale and Howell, NJ is the Old Ardena Schoolhouse.

This historic site, which was once a one room schoolhouse where boys and girls in the 1800s would spend their days learning, is today a museum that encapsulates the history that the building now holds.

History of the Schoolhouse

Originally constructed in 1835 and reconstructed in 1855, the Old Ardena Schoolhouse was one of the first educational establishments in Howell. The original 15 ft. by 16 ft. school welcomed both girls and boys, with education spanning from K through 8th grade.

Education in this era, while still important for growth and brain development, did not have the same structural foundation that people are accustomed to today. Teachers would stand in the front of the room 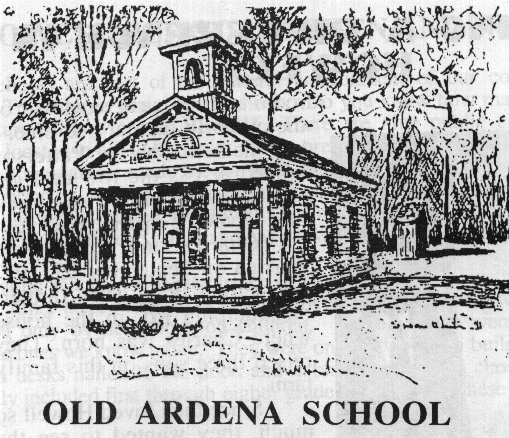 and present a lesson, but it had to be geared towards the understanding of everyone, five years old and 14 years old. The reasoning for this was that as a one room schoolhouse teaching children of varying ages and learning abilities, teachers had to ensure that younger kids wouldn’t get frustrated because they couldn’t understand the material and older children, who already understood the material, wouldn’t become bored. As a result, teachers often relied on older students to help the younger ones learn the material that they (the older students) had been taught in previous years.

Due to this buddy system style of learning, education was cyclical and more community based in the early to mid-1800s.

Rather than having students separated by age and learning ability, the teacher at the Old Ardena Schoolhouse would gear the early morning’s lesson towards the group as a whole.

The teacher would give the older children a lesson in the mid-morning that was geared towards their stronger ability to absorb knowledge then, in the afternoon, she would teach the younger children, asking the older students for assistance with teaching and explaining the lessons because they, themselves, were taught it only a few years before.

Also, when the teacher was focusing on one group of children, the others would sit in the classroom and continue their studies on their own.

Through this method of education, children within the community became closer friends and formed a stronger bond.

The school, which contains two doors, one for boys and one for girls, also had a much more flexible schedule.

Considering most children in the 1800s were still needed at home as farmhands and kitchen assistants, it was not uncommon that they would leave during their hour lunch break, go home to help and return early afternoon to continue their studies.

It also was not uncommon for school years to be much shorter, only about 130 days instead of the usual 180 found today, because parents would need their children on the farm, helping to cultivate the crops.

Although it was a place of education for children living in the Howell, NJ area in the 19th and 20th century, the Department of Education did not overstep bounds and keep children from assisting their families with agricultural needs.

Because schooling was not mandatory at this time, it was given a distant second place to work, farming and family survival.

Now under the care and maintenance of the Howell Historical Society, the Old Ardena Schoolhouse stands as a local landmark that attracts history buffs and curious passersby alike. It not only represents the strides America has made in education, but also the development and growth New Jersey has experienced over the years.

The schoolhouse stands as a visual reminder to onlookers that the Garden State and, more specifically, Howell, was not always built up and filled with houses, stores and highways; it was once an entirely farm based rural community where schooling was not the number one, “everyone must attend”, priority.

From this perspective, the local residents come to appreciate the advancements and ease of learning that they often overlook today.

The Old Ardena Schoolhouse was previously opened on the the last Sunday of every month, during the 12 – 4pm hours of operation, and people were invited to tour the school and view various artifacts from the time period. Much like students did years ago, the tour guides will have men and women who will enter the school through their gender designated doors and sit down, or stand around, one of the students’ desks.

As visitors spend time in the school, immersing themselves in the history, they will get a genuine feel for what it would have been like to learn in the 1800s.

They will be shown various examples of what materials were used, the types of subjects that were taught and learn about the time period as a whole.

Unlike other tours which physically guide participants through a location and explain details of why it is important and how it contributes to history, the Old Ardena Schoolhouse speaks for itself.

The one room building, likely perceived as insignificant in its time, now carries the air of simpler times. Its architecture, which resembles that of a church, signifies to visitors that religion played a major role in society during the 1800s and was communicated not only at home 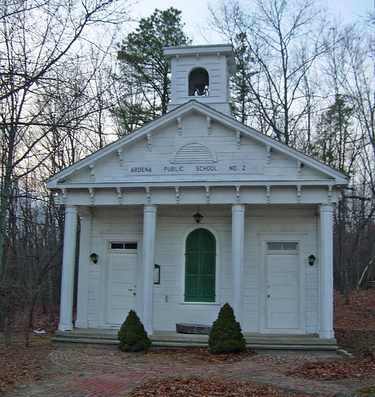 and at places of worship, but also in school.

Its simple structure also notes that people did not rely heavily on material things years ago.

Where schools today can have hundreds of rooms, all filled with the latest technological tools, modern desks and electronic whiteboards, the Old Ardena School House, as it can be seen, was just one room. It acts as a reminder that none of the luxurious materials are truly necessary for education.

Due to its place in history, the Old Ardena Schoolhouse can have two effects on people.

The one room schoolhouse will inherently make some people appreciate the present and everything that they have, while other people reevaluate their extravagant lives and question what is truly necessary for a successful and fulfilled existence.

Some people on the tours have been noted inquiring about the different effects that education today has on students compared to the education of children who attended classes at the one room schoolhouse.

While these inquiries can never be concretely placed, they signify the importance of the building and why it continues to open for tours today.

Why does the Schoolhouse remain open today?

This is not fully confirmed, but the The Howell Historical Society was trying to continue to open the Old Ardena Schoolhouse on the last Sunday of every month because they feel that the history needs to be experienced.

From our research, the Howell Historical Society was running tours from noon until 4pm on these Sundays. The informational tours were to engage visitors to participate in a number of activities. It is the hopes of the historical society that all of the local Howell, Jackson, Freehold and Farmingdale residents will decide to visit the historical landmark and experience the small piece of national history that Howell holds.

See other historical and cultural attractions you may have never known were in NJ.

Have you visited the Old Ardena Schoolhouse? What was your experience like? Comment with your answers below!

A Tour Of The New Jersey Spoon Museum

Many things may seem to be deserving of a museum devoted to them. For example, the Thomas Ediso ...

If you’re one of the lucky chaps who have gotten a chance to stroll through the Atlantic City b ...
0 0 votes
Article Rating
Subscribe
Login
0 Comments
Inline Feedbacks
View all comments