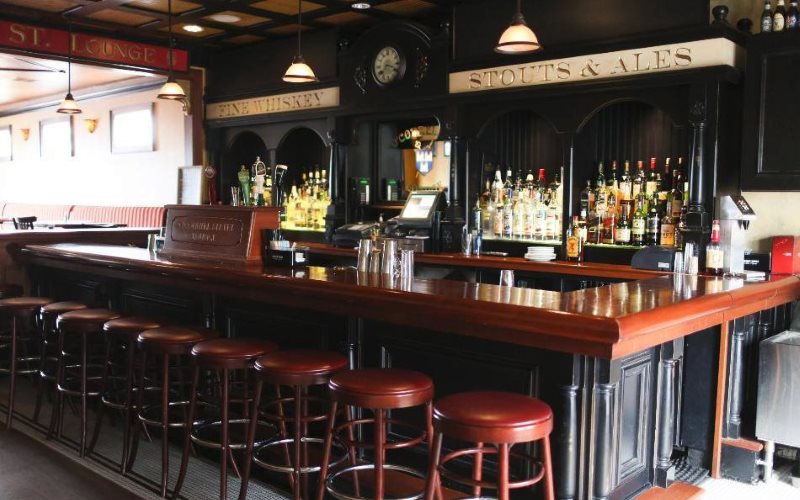 The Dublin House in Red Bank is a popular spot among locals…and local ghosts?

The Jersey Shore is a popular destination every summer. It’s so popular, in fact, that many people don’t want to leave…even after death. Local legends state that there many haunted places among the beach towns on the shore. Jersey ghosts seem to love haunting restaurants in particular. If you dare, read about some of the most haunted dining establishments on the Jersey Shore.

The Dublin House: With a history dating back to 1840, this Irish public house in Red Bank, NJ is said to be haunted by the ghost of Mrs. Patterson, who was a tenant when the restaurant used to be an inn. When the Dublin House was under construction in 2004, the restaurant took on an eerie feel. Doors would reportedly open on their own, and newly remodeled walls collapsed. Perhaps Mrs. Patterson was unhappy with the construction work? The living who haunt the Dublin House know it for its live entertainment on Sundays and Thursdays, as well as being the pub on the Jersey Shore to watch soccer, rugby and hurling. 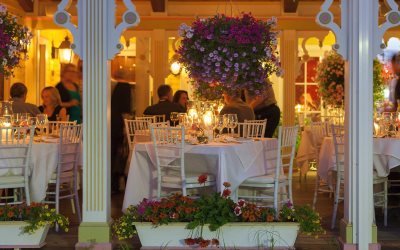 The Gables: This charmingly restored Victorian inn has been honored by Zagat, Open Table, Trip Advisor and Wedding Wire. They offer fine food and service, as well as overnight stays during the summer. However, tourists and diners aren’t the only ones enjoying The Gables. Legend has it that during the 19th century, a young woman was staying at The Gables during the summer, working in Beach Haven and hoping to fall in love. One night, she died in her sleep from congestive heart failure – or perhaps from a broken heart? Her ghost still haunts the inn. Guests have reported sobbing and wailing coming from a particular bedroom, as well as the scent of lavender perfume.

The Grenville Hotel & Restaurant: This historic hotel in Bay Head, NJ dates back to 1890 and has passed through the hands of numerous owners throughout the years. It is recognized by the Bay Head Historical Society for being a carefully preserved establishment. It is so carefully preserved, in fact, that the ghosts feel right at home. Silverware and dishes are rumored to move on their own. Employees commonly hear footsteps in empty rooms, particularly on the third floor. The owner has assured patrons that the ghost are friendly, and are probably the former owners of the hotel. Listen closely for the laughter of small children playing. You might even see ]apparitions of elegantly-dressed Victorians.

The Shore House Bar & Grill: Don’t let the new name fool you. The Shore House, formerly Magee’s West Side Tavern (and more formerly known as West Point Hotel) is one of the oldest operating taverns on the Jersey Shore. It is also one of the most haunted. The building, which at one point was also a hotel and brothel, was used as an impromptu morgue for the victims of a shipwreck in nearby Mantoloking in 1846. The ghosts reportedly love to haunt the attic and cause trouble for the waitstaff. If this ghost story doesn’t scare you, come by The Shore House for their great drink specials every night of the week. 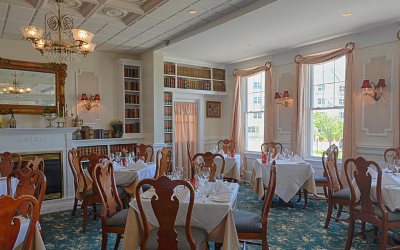 The Union Park Dining Room is empty…or is it?

Union Park Dining Room: Cape May is one of New Jersey’s most haunted towns. The Union Park Dining Room, located within the historic Macomber Hotel, is a popular stop on the Haunted Cape May Tour. The spirits are rarely present when guests are around, which might be why this is still a popular wedding venue. Table cloths lift up from the table and knives are mysteriously moved. The Macomber Hotel itself is known for its eerie Room #10. During the 1940s, the hotel had a repeat guest every summer after her husband died. This patron always brought a heavy steamer trunk with her. Although dead, “the trunk lady” apparently still likes to come visit the hotel three or four times a summer.

The next time you’re down the shore, check out one of these haunted restaurants. Who knows – maybe you’ll share a steak with a spirit or grill with a ghoul! Ever have an eerie experience at a New Jersey restaurant? Let us know!

Check out our NJ Beach Guide for all things to do by the shore!

Ray Gallagher is a true Jersey girl. She has written for a number of publications and is excited to be part of the Fun New Jersey team. When she's not writing, she can be found running on the boardwalk, laying on the beach or seeking out the next big thing in New Jersey.

The Haunted Estate of Woodrow Wilson