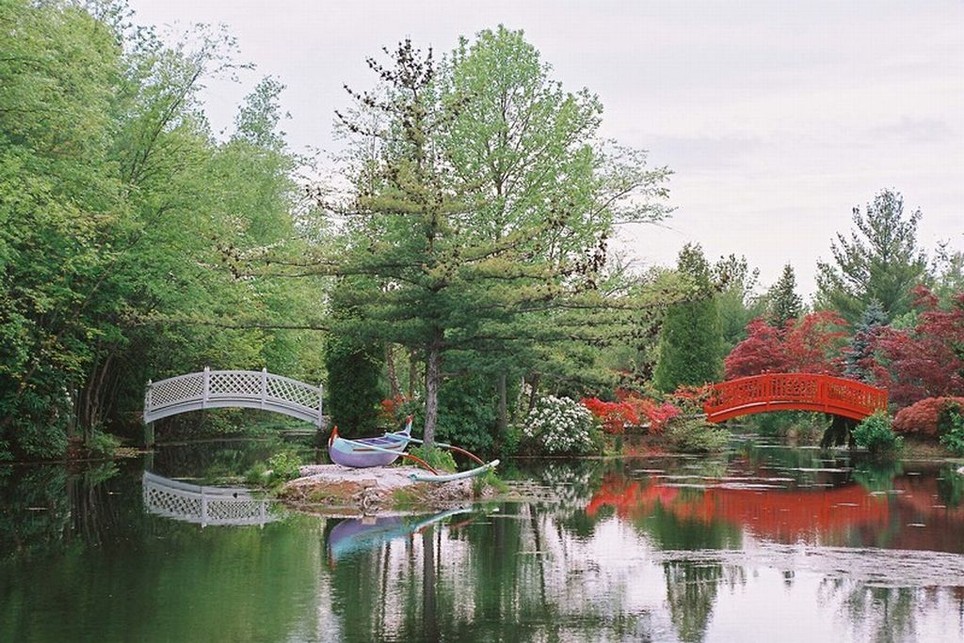 New Jersey has been a hotbed of artists for as long as anyone else can remember. Sometimes, those artists earn their successes in the form of music, such as with Frank Sinatra and Bruce Springsteen. Other times, New Jersey’s artists shine in the spotlight of theaters and movies, such as Jay and Silent Bob.

And then, once in a blue moon, an artist in New Jersey will make themselves known through their sculptures and the attractions that they build for others to enjoy. These strange attractions are the only ones of their kind in the US, and at times, they become legends in their own right. This article will describe some of the strangest attractions in New Jersey history.

Back in the early 20’s, George Daynor was living in Vineland as a former Alaskan gold miner. Needless to say, his entire life’s worth of money disappeared when the market crashed in 1929. Supposedly guided by an angel to New Jersey, he bought a plot of land in New Jersey for 4 dollars. Depending on who you ask, Daynor either went mad, or suffered from a stroke of sheer brilliance.

Instead of simply living in a tent or in a poorhouse like many others in his situation, Daynor took the land that he still owned, and began to build upon it. He did not, however, use typical materials. Instead, he used junked cars, random materials that he found in garbage cans, and mud. During the time he was building, he ate the animals that he trapped on the 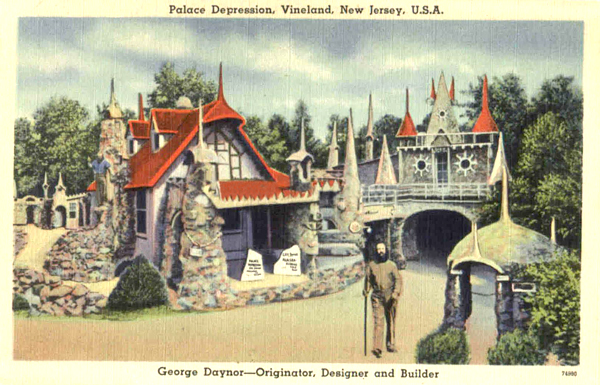 multi acre property and lived frugally. The end result was a massive, 18-spired building that was painted with every color of the rainbow.

Being the publicity fiend that he was, Daynor had begun to advertise it with post cards, and even built a movie around the creation of the Palace Depression grounds. He charged 25 cents for a tour, and also had gimmicks such as the knockout room – where he purportedly offered to get rid of peoples’ bad memories by dropping a bowling ball on their head. He also was known to tap out rhythms on his home for guests, and was also known for trying to get partnerships started with companies in hopes of promoting his attraction.

Unfortunately, it was his love of publicity that was his downfall. In the 1950s, a couple reported a kidnapping of a baby. Daynor, possibly in the most ridiculous lapse of common sense ever, phoned the police and lied, saying that they had visited his palace the day before the baby went missing. The FBI investigated him, and threw him in jail for years.

Daynor died a pauper, and for a while, the Palace Depression was ignored. However, in recent years, restoration efforts have begun, and it will likely become a tourist spot again.

Not to be mistaken with a playground made by a bunch of people from Greece, Greek’s Playland is the brainchild of a single artist who goes by the name Spiro “Greek” Drake. Much like the Palace Depression, Greek’s Playland was a park that was touched by tragedy marked by the Great Depression.

In the early 1930s, right when the Great Depression turned full force, a baby was abandoned in a dumpster. Authorities found the child, and turned him into a state-sponsored foster home run by a woman called Elizabeth Van Fleet. That child was Spiro Drake, and after he had achieved great successes through his career as a landscaper, he decided to buy land and build a park that everyone could enjoy as a gift to his foster mother.

By 1972, the park was fully operational. Giving tours to children who were handicapped and disadvantaged, the Greek made sure to come up with new ways to help them have fun every day. Since the park’s inception, over 100,000 children had taken tours, held parties, or just went to explore the park’s unique attractions.

The entire park consists of the strange, colorful, and sometimes downright bizarre statues and contraptions that he made out of artifacts that he had found lying around. While you can definitely marvel at the 40 foot tall tin clown sculpture, the painted tire garden, and a number of other surreal pieces outdoors, there are many other attractions that had gotten the Playland accolades throughout the years.

Also part of Greek’s Playland is the Stone Museum, which hosts fossils and minerals from over 80 different countries. Kids get to have hands-on experience with dinosaur eggs, fossils and minerals. The collection totals over 1,800 different specimens, many of which were donated by big names such as Monmouth University.

The Playland’s entire concept was giving people a place to enjoy life outdoors. It’s easy to see why so many kids enjoy it there. Between the slick dinosaur statue garden that boasts a roaring dino, the giant maze, a scenic lake, the M60 tank donated by the US government, and the unique paintings, there’s literally something for everyone.

This land of happiness and joy is open to the public currently, and is in Monroe.

During the Great Depression, the US government began funding a number of art projects in hopes of giving people a job and sparking economic growth. Some of these art projects spurred on such major cultural aspects as Broadway theatre.

Light Dispelling Darkness was one of the many projects greenlit by Roosevelt’s WPA, and to make sure that it was a success, the government placed known sculptor Waylande Gregory as the project leader. Gregory had already gotten acclaim for his work for acclaimed figures like Einstein, and for the fact that his sculptures were massive. His mission: create a fountain sculpture that honors Thomas Edison out of terra cotta.

Unfortunately, it looks a bit awkward.

The concept behind it is actually very beautiful. The central pillar of the sculpture is meant to represent technology, hard work, education, and innovation. It does so beautifully, with a bit of art deco flair, to boot. The strange and awkward points of the sculpture are the six surrounding arches that circle the pillar.

Each arch is supposed to represent a vice or problem with society, and each arch has its own horrifying, painted character turned away from the center. The legendary Four Horsemen Of The Apocalypse are represented as well as two other horsemen that Gregory Invented.

A Trojan soldier wearing a gas mask is War.

Pestilence is a strange blue creature riding on a horse with a dollar sign on its rear end. It’s also covered in sores.

A waiflike woman carrying the scales of justice is Famine. (Or, it could be an early depiction of a runway model. It’s hard to tell.)

Materialism, one of Gregory’s own inventions, is represented by a snake like hydra with five human heads that trails stock market ticker tape.

The other horseman, Greed, is depicted by two octopi in a fight. (Yeah, we don’t understand that, either.)

The statue was welcomes with slightly mixed reception. Some found it to be absolutely inspiring, others were confused by the symbolism and the fact that only the dark characters were painted.. He had managed to make an even larger name for himself with a number of other famous pieces in the late 30s and early 40s. So, it had to be a pretty good reception overall.

By 1968, the bright colors had faded off the terra cotta, and the statue lost much of its detail. Moreover, the fountain portion of the statue had stopped working. It was in a state of disrepair. Needless to say, he was pretty dismayed about this. For decades, the strange fountain-statue faded into obscurity.

In 2005, the Middlesex County Parks Department and the National Endowment Of The Arts funded a major restoration effort on the statue. While the statue now occasionally functions as a fountain, a lot of work still has to be done on it. As of today, it’s the only statue from Roosevelt’s WPA program that still exists in the state of New Jersey, so, you might want to see it regardless.

New Jersey’s art scene was definitely affected by the Great Depression, but unlike what many people would expect, it didn’t cause art to become dark. Instead, every major art attraction touched by the Great Depression seemed to be made to cheer people up, show people the optimism that comes with hard work, and also encourage people to get creative. And, that’s an amazing, wonderful legacy to leave to future artists everywhere.